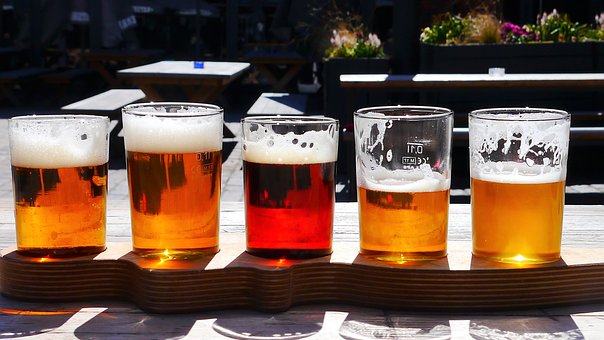 The beer revolution in the USA is real, and it is beautiful. Naysayers can chalk this up into a fad. Traditionalists can scoff as they sip on their can of watered-down mash. Both, ultimately, are simply depriving themselves of what has turned into a ferocious revival of beer in America. So what did they do? In the truest of American style, they took the best styles of beer in the rest of the world and made them better.

The conventional lager-style American beer was originally brewed out of necessity. As prohibition was being slowly repealed, a loophole created by the Volstead Act allowed for alcoholic drinks which were deemed to be non-intoxicating to be produced. This threshold, for any reason, was deemed to be 3.2% alcohol by weight, and thus came the creation of the modern day light lager. Soon after the complete repeal of prohibition, America entered World War II and the demand for beer skyrocketed. Given the conditions, the beer would have to meet two criteria: It should be easily mass-produced, and constructed of cheap ingredients. Americans, being the creatures of habit that all of us are, became accustomed to the beer and literally nothing changed for the next 40 years.

What is now referred to as craft beer actually has roots in the 1980’s in America. It’s popularity was limited to cult followings for the most part, with a couple of breweries breaking through with national accessibility. The growth remained slow, as the large American”macrobreweries” continued to dominate the market. Areas on the West Coast and Denver became known amongst the beer community as the meccas for craft beer, but their visibility from a national standpoint remained minimal. The past decade has seen an explosion in the number of and the prevalence of craft breweries across the nation. According to the National Brewers Association, craft beer saw a 17.9% increase overall in 2013, even though it still lays claim to only 8 percent of the total beer market. 2013 saw the launching of over 400 new breweries across the United States, and the smart money is on 2014 exceeding that amount. Competition in the usa has always bread creation, and the beer industry is no different. If you haven’t found a beer that appeals to your palate, you are simply not trying. Let’s take a closer look at a few of the main styles, including some of my personal favorites in each category.

A beer made by British merchants with enough hops (and alcohol content) to endure the long journey to British-controlled India.

The signature sour flavor of the English Design IPA persists in the American IPA, but with it comes the addition of hop varieties which make an amazing spectrum of scents and tastes. The American IPA traditionally has an orange color, and an unmistakable aroma of fruit and floral. There are many variations of this American IPA, but the most common (and in my view tasty) is often known as a West Coast IPA, tracing back to its roots in the Pacific Northwest and California. The”hoppiness” of an IPA is quantified in IBU’s, or International Bitterness Units. Contrary to the frequent assumption, a bitter beer is most certainly not a bad thing. The best IPA’s find a way to include enough hops to make the terrific aroma and flavor that beer drinkers have come to enjoy, with a balanced finish that leaves you savoring every sip.

Like coffee, Inda Pale Ales are most definitely an acquired taste. If the hops are too overwhelming, I would suggest starting out with a Pale Ale. Pale Ales offer a flavor that is similar, with a lower IBU, and a tend to be less of a shock to the system.

The Stout. The stout typically stays true to its name. It originated as a term for a particularly strong porter, but has since morphed into it’s own style of beer. Full-bodied, flavorful and filling. These are typically enjoyed while the air is a bit colder, but do not be afraid to keep a few in the refrigerator year round.

Stouts generally provide a malty taste, often described as”roasty”, in reference to the coffee notes that are common. In actuality, many breweries have begun partnering with local coffee shops to create coffee stouts that incorporate even more of that taste. Stouts are full-bodied sufficient to incorporate chocolate and milky tastes without coming off as a sweet beverage.

Ambers tend to have a smooth finish, with a caramel and malty taste. The complexity of them allows for the addition of multiple flavors, without significantly changing the last product. I would consider Amber beers to be a”medium” beer, falling right in the middle of the beer spectrum, and thus a great choice for craft beer beginners.

Reds and Imperial Reds tend to be a hopped-up amber, balancing the maltiness of an amber with a crisp, bubbly finish. The hops also tend to drive up the alcohol content, especially with the imperial reds, making these a wonderful cool weather beer.

Belgians: The Belgian beers have a very distinct taste, but offer a great variety of finishes. It’s difficult to pinpoint the collection of tastes that embody a Belgium beer, but if you have ever had one, you can realize it almost instantly. There is a tendency to brand them as wheat beers and they’re generally expected to be served with an orange. But to label all Belgian beers as simply a beer that includes citrus could be a disservice and downright wrong. We will concentrate on the less publicized types…

The Beligan Dubbel, AKA abbey ale, will be darker, higher in alcohol content and less sour than the average Belgium beer. A fantastic abbey is difficult to beat.

The Saison’s are lighter, fruitier and often provide a little bit of spice.